Added by Jozef Sivek about 7 years ago. Updated about 1 year ago.

The lens correction module has not very user oriented UI.

I understand that blind introduction of more adjustable parameters in the lens correction module is not the solution. The module may be splitted, or even introduce some hierarchy to hold all the functionality.

Updated by Torsten Bronger about 7 years ago

Here is my proposal: 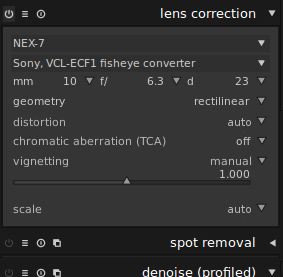 This "correction function" for vignetting is the correction polynomial in case Lensfun has a vignetting profile for this lens, or a general-purpose function which still has to be determined otherwise.

Updated by Roman Lebedev about 2 years ago

Updated by Roman Lebedev about 1 year ago